There’s something quite depressing about driving through what’s left of Britain’s green an pleasant countryside in recent years. Villages that I used to visit or travel through on the way somewhere, have suddenly sprouted ugly new housing estates on their extremities. 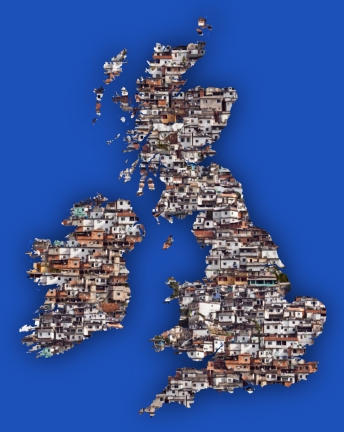 According to the Housing Charity Shelter and other governing bodies, we are in the middle of a “Housing Crisis”. Apparently, another three million new homes must be built in England over the next 20 years to try to combat it.

I have had the misfortune of being involved in the thick of this argument of an “Housing Crisis”. Recently a local farmer, like many others, discovered it would be more lucrative to sell some land than to farm it. Within a blink of an eye, plans had been made to put 200 houses on the land. The bad news quickly spread and a local residents group was formed in protest against the build. Meetings were held and with little and no help from the local parish council, most of whom didn’t even live in the village, we expressed our views in the one-sided debate and managed to prove that the local infrastructure could not facilitate these houses. What with the already overstretched road network and the old sewage pipes, a major rethink was required. But while this was going on, another builder managed to sneak into the next field and build his houses on the perimeter, pushing the border a further quarter mile out. As always, too much money changing hands and not enough voices opposing.
Going back to my opening statement about how depressing it is, to add more fuel to my fire of despair, I recently travelled through one village in which I used to live, and l was shocked. It had been extended by a mile with the addition of two large housing estates. It was originally 3 miles to the next village, now it’s only 2.
It doesn’t end there, in the middle of our village there was a large house with lovely grounds, owned by a family that had been in the village for decades. The house was used as the centre point for fetes and other local events. We could wander around the gardens showing all their splendour in mid-summer. Unfortunately, the owners passed away and the house was sold…..Bulldozers came in and it’s all gone… replaced by half a dozen eye sores crammed in a cul de sac where no-one now ventures.
Another village I know had an office complex forced upon to it. The project was finished well over 5 years ago and there are still signs saying office space for let. Why were they built if they were not required?
It’s so disappointing when there’s still plenty of houses that can be renovated, large houses that could be made into flats that people could afford. Old factories that can be brought up to date and reused.

We were very fortunate a few years back to move into a relatively small village on the outskirts of Leicestershire. 20 years on with the village growing too fast and has become too busy, we are now thinking of moving to a nice quiet small village on the outskirts of…… ? Any ideas anyone? Where is safe from the expanding brick mutant? What are we doing? None of this can be undone, the beautiful green fields, trees and hedgerows – GONE! It’s time for us to stop the madness. Time for us to shout about it. I have a big soapbox to stand on.. join me.