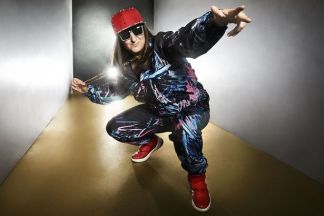 Having just been to another open mic night where we watched and listened to a mixture of unknown talent. Over four hours of pure enjoyment as Sid, the venue’s host, took us from one act to the next. Each act belted out their choice of four titles. The audience made a few suggestions of their own which were sometimes granted. My mind couldn’t help thinking about the night before, where[clash] whilst putting on my shoes to go out in front of the TV, which was still on warming the room with no-one really watching it, Dermot O’Leary (who I’d like to ask “why does he choose to stick with such a poor program?”) announced the next act as “Honey G” and would she (or he, not too sure) have what it takes to get to the semi-finals? The music started, then this “artist” started to sing/rap. My ears were immediately repulsed. There is something bitterly wrong when someone without any talent gets so far in any show to almost reach the semi-finals. Has she/he no friends that could have taken her/him to one side and explain that she/he couldn’t sing? I aired my view to my wife who explained that it was the public that votes for them to get this far. WHAT? REALLY? So let me get this right! There are people out there that have picked up a phone, texted or rang a number to KEEP this talentless bundle in as a joke? They’ve paid out hard earned money to BT and their mobile network supplier just to keep her/him in? I’m struggling with this. Why would you want to do it? Is it because you think you’re messing with the out come? I can’t and won’t believe that it’s because you really think she/he has got talent.  Well whatever the outcome on the show, Mr Cowell and his fellow assassins on talent, have  it covered all ways. They and BT get revenue in one form or another from your calls/texts, and as long as you keep watching, they’ll keep turning out this excuse for entertainment adding to their personal fortunes. And by-the-way, rumour has it, that Honey G was just created solely for the show to add entertainment. Wow what a surprise it’s all fixed.

What has happened to British comedy? Scanning through the TV channels it’s difficult to find any form of sitcom that is actually funny. The idea of comedy is a scenario or situation to have a surprise twist at the end, making it funny. However most comedy written today relies on shock tactics that are vulgar or tasteless.
Granted after you’ve seen the 412th episode of Last of the Sumer Wine, the comical twist has become tired. And yes it does therefore need a new approach. But nowadays this new approach evolves blatant swearing or crude sexual visuals to bolster the already obvious outcome of the gag.

When I think back over past sitcoms with the likes of, Are You Being Served, Blackadder, Bread, Butterflies, Dad’s Army, Fawlty Towers, It Ain’t Half Hot Mum, Last of the Summer Wine, One Foot in the Grave, Only Fools And Horses, Open All Hours, Porridge, Rising Damp,  Some Mothers Do ‘Ave ‘Em, Steptoe & Son, The Fall and Rise of Reginald Perrin, The Good Life, The Likely Lads, The Royale Family, and even ‘Allo ‘ Allo!, Red Dwarf, The Office, Men Behaving Badly with their slightly riskier overtones, all these delivered the punch line with a subtleness that is sadly missing from today’s sitcom.
Have we as a race of people become so obsessed with fast foods, fast cars and fast Internet (unless your with BT), that we’ve lost the ability to make the fine distinctions between humour and poor taste. 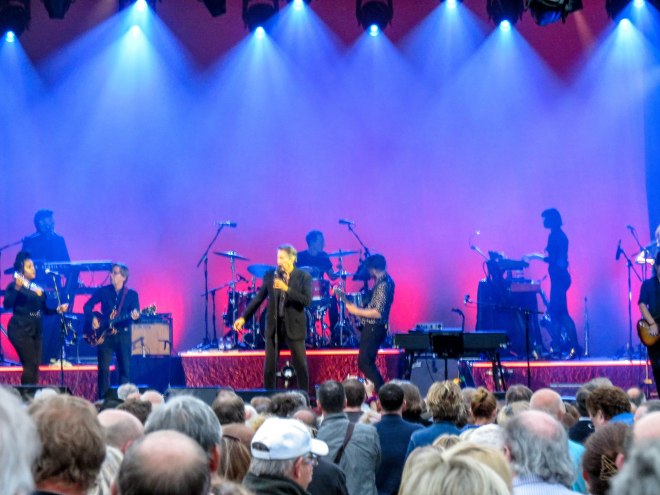 On June 12th 2016 Burghley House in Stamford  became the focal point of over 10,000 Bryan Ferry fans. Mr Ferry and his multiple piece band did not disappoint, starting with tracks from his latest album, then effortlessly sliding into pasted tracks from his solo career. It was difficult to believe that the former lead singer with Roxy Music was in his seventieth year and still going strong. His appearance was still the same, suited and well groomed, his smooth vocals with the excellent backing vocals glided through almost thirty songs. 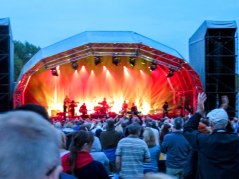 The stage was set in the grounds of the Elizabethan

house, with the lighting and large screen managing to highlight Mr Ferry’s unmistakable moves as he progressed though some old Roxy Music favourites. The atmosphere was captivating, the crowd was focused and singing along whilst picnicking, with food and drink a plenty and the rain held off.
So Mr Ferry, “Let’s Stick Together” and “Don’t Stop the Dance.”

It was a chilly and overcast Bank Holiday Sunday when my wife asked if we should go to the Burghley Country Fair, I will admit that there was a ‘fair’ bit of scrunching of the nose and a lot of ‘Nah’ going on in my head. But before I knew it I was standing at the front gate faced with a £13 each entrance fee, which just deepened my reluctant mood.
Walking up the rolling drive we got our first glimpse of the Elizabethan house, it did look spectacular. The fair was set on grounds to the west side of the house. With over 100 stands to look at, it’s slightly overwhelming where to start. A beer tent soon appeared on my horizon, but a glimpse at my watch made me think twice, it was only 10:50am. Moving around the stalls there was plenty to look at from the country gent outfitters to drone cameras. END_OF_DOCUMENT_TOKEN_TO_BE_REPLACED